... and here we have the final 2 test battalions. The British battalion was done 40 minutes after the French and the Prussian battalion was finished about 30 minutes later.

Firstly a British line infantry battalion of 720 men in 2 ranks. In Empire V, 12 x figures is 720 men and these are usually based in 4 and 2 figure stands just like the French and Prussian but on wider stands to represent 2 ranks instead of 3 ranks. So 6 stands of 2 figures becomes 6 stands of these 2mm stands but wider than the French stands and using 2 ranks instead of 3 ranks. 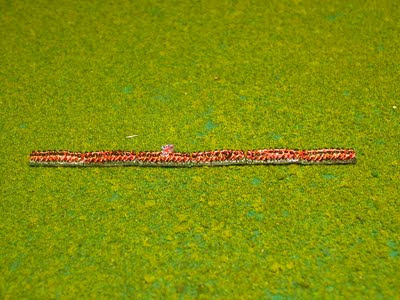 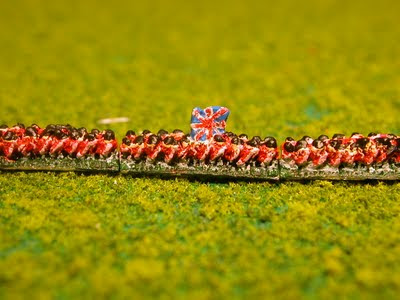 And a Prussian line infantry battalion of 800 men in 3 ranks. Back to 3 rank stands but because 800 men would be 15 or 16 figures in Empire, the 4 stands representing the 4 companies are a lot wider.

This is where the differing widths available in the 2mm range by Irregular helps to give the nations in Empire more defined formations that are all historically accurate but still easy to conduct gameplay.

Everything in Empire is figure based, so 12 figs firing at the enemy may kill 1 fig. This would be 6 2mm stands firing and making 1 kill on an enemy stand where 2 kills on that stand results in its removal. 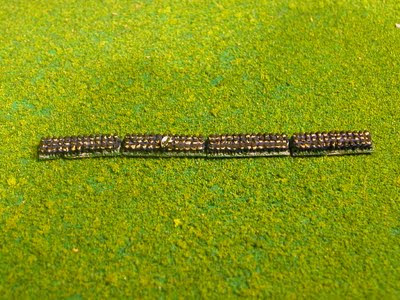 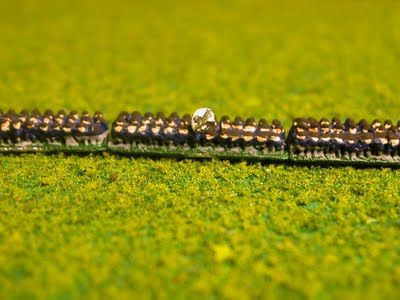 I think they all look good. Now looking forward to painting up the cavalry. I am seriously thinking or sending in a full order for a division of 2 with Irregular and painting them up and playing a quick battle to get their true look and feel. But that is getting ahead a bit.

You have painted a 2mm scale union flag, kudos.

Where? All I see is the Biritsh union jack and the Prussian flag. I dont get it.

I see. So what flag should I have painted?

Or rather people call it the union jack but they are incorrect.

Aha! Now I get you. I thought you meant "Union" as in the Yankees, the US troops in ACW.